Ignorance of plant protection in areca palms at early stages can cause considerable loss from the sucking pests, particularly, Coccus hesperidum Linn. (Hemiptera: Coccidae) during unfavorable weather conditions. In order to overcome this, replicated field trials at five different locations were conducted during 2008/2009 and 2009/2010. Synthetic chemicals (chlorpyriphos 20 EC at 2.5 ml/l, endosulfan 35 EC at 2 ml/l, bupfrofezin 25 SC at 1 ml/l and methomyl 40 SP at 2 g/l), Aazadirachtin 0.03% at 3 ml/ (botanical group) and spinosad 45 SC at 0.5 ml/l (microbial derivative) including an untreated check were imposed twice at an interval of 15 days. Treatmental effects were assessed five days after each spray from 2 cm2 leaf area. Pooled results indicated that all the insecticide treatments were found to be significantly superior over untreated check control by recording the lowest population of scales. Spinosad and bupfrofezin were found to be significantly superior and were on par with methomyl by registering lowest number of scales. Methomyl was on par with ruling insecticide endosulfan and was significantly different from standard check chlorpyriphos with lesser population of scales. Azadirachtin recorded higher scale population than other insecticide treatments. Microbial derivative spinosad and bupfrofezin were found to be effective against arecanut scales than other treatments and can be used in managing arecanut scales. 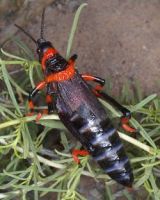